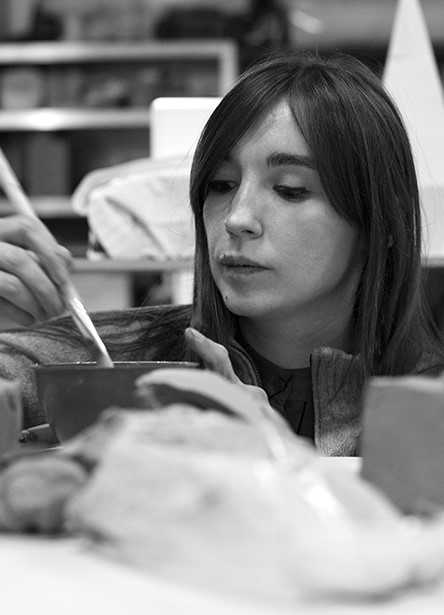 Lucie Lanzini, a French artist born in Belfort (FR) in 1986, trained at the National School of Fine Arts in Lyon and based in Brussels (BE) since 2010, transposes objects or fragments of objects of one material to another: resin, polyurethane foam, jesmonite, pigmented by the artist. Lucie Lanzini cultivates a particular sensitivity to memories and memory. Her work of molding and sculpting offers the artist a playground that she exploits perfectly to disturb our perception of things. Lucie Lanzini has exhibited on several occasions in Belgium and abroad in solo and in group. Among her most notable solo exhibitions, it is worth mentioning, among others: her 2016 solo exhibition at the MAAC (current Charteux art house) in Brussels (BE) and the remarkable exhibition « The Arrow of Time » in 2017 at the Jozsa gallery in Brussels (BE). Among her numerous group exhibitions it is worth mentioning her participation in the collective exhibition organized by the Center Wallonia Brussels (2013) based in Brussels (BE) and her participation in a collective exhibition organized in 2017 at the Patio Opéra in Paris (FR) curated by artist Mehdi-Georges Lahlou. She has also won several awards as a consecration for her talent, including the « Art Contest » (2010) prize, a Belgian competition for talented young artists and the « Médiatine-Macors » prize (2018), an important distinction and a talent pool for young artists, notably through the organisation of an exhibition at the Médiatine and the publication of a catalog. She has just been named winner (based on a project responding to a call for tender of the Belgium based French and Brussels government (FWB) introduced in cooperation with the commissioner Nicolas de Ribou) that grants her the right to occupy the FWB stand at the Art Brussels edition of 2019, one of the biggest contemporary art fairs in Europe, yearly held in Brussels (BE). Her work is part of major collections, such as those of Galila Barzilai Hollander, the family Freché and the mecenas and art collector Olivier Gevart.

The works of Lucie Lanzini