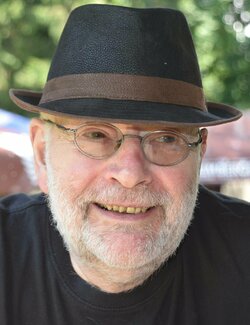 Born in 1945 in Haine-St-Paul (Hainaut-Belgium) and holder of a degree in Art, Michel Liénard has been teaching drawing, etchings and art history for a period of 35 years, while pursuing an artistic activity that quickly propelled him onto the international scene.
With Michel everything starts with patiently constructed graphs. Then a detail, a piece of the work is enlarged and color is added.
Michel’s work has been purchased by a large number of official institutions and private collectors.
His first exhibition in 1970 was followed by numerous purchases from official institutions and private collectors at home and abroad. In 2003, a personal exhibition resulted in the purchase of a triptych and a watercolor for the artistic heritage of the province of Hainaut and the French Community of Belgium. “Le Centre de la gravure et de l’image imprimée” in La Louvière (Belgium) has about ten works in its permanent collection, as well as the European Commission that acquired a number of works in 2016 for the “Berlaymont” building situated in Brussels (Belgium).

The works of Michel Liénard